- The dark Thanksgiving event of 2022

Ort: The Social Hub | Nordbahnstraße 47, 1020 Vienna
Join the U S A chant with 3 of Europe's Top American Comedians and a dark, long-legged hostess in the hip auditorium of TSH Vienna.
DJ, a free shot and the spectacular red bar are waiting for you to put your hand on your heart and raise the flag!
Rick Kiesewetter is an Asian-American comic. Adopted in Japan and then raised in a small town in New Jersey. Served in US Army Intelligence in Germany and has been living in the UK since 1993. Rick talks about everything from being adopted and his experience of living in Britain to starting comedy late and learning about racism.
Beat The Frog World Series 2005 Finalist , FHM/Holsten Pils Stand-up 2004 Finalist, Metro London Comedy Festival Newcomer 2003 Finalist, BBC stand-up comedy competition 2003 semi Finalist, 3 time Comedy Store “King Gong" winner
Alan Henderson is a part-time comedian and full time taco-eater stranded in Slovakia. With a confidence that far exceeds his looks, education, talent, and ability, Alan uses his Southern wit and ignorance to come to terms with growing up in a cult, life in Eastern Europe, fatherhood, and his own failings.
Gus Horn is a Brazilian-American comedian who discusses the challenges of relocating to Vienna, his battles with COVID, travel stories and the ins and outs of having a corporate job during the day. He recently openend for Russell Peters and if you mention that to him you'll be his friend forever!
When: 25.11.2022
Time: 19:30 - 22:40
Where: The Social Hub | Nordbahnstraße 47, 1020 Wien
Price: € 8,00
Anmeldungen unter: oehwu-events.com 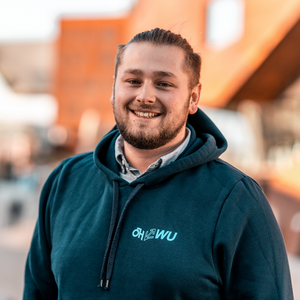